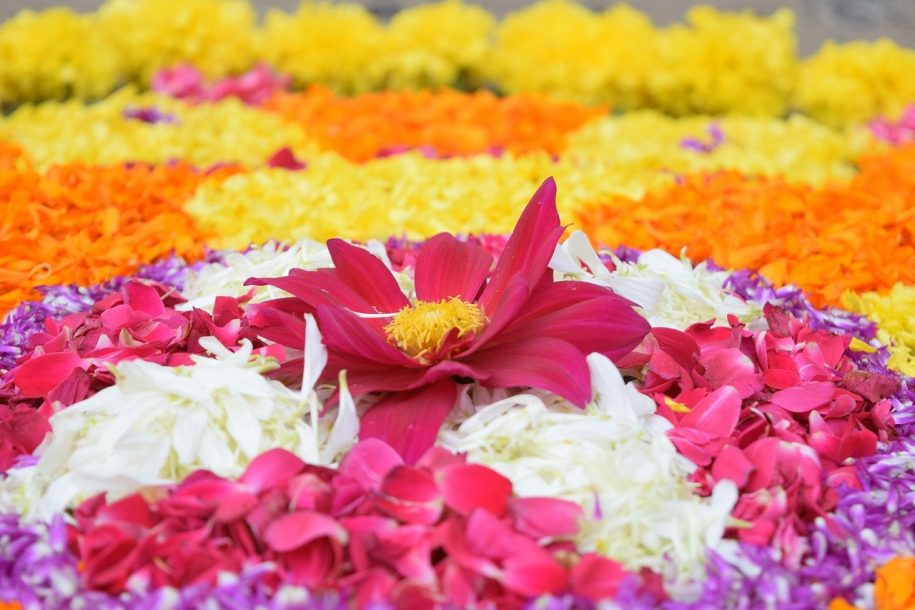 If you are looking to go on a holiday in Kerala during a festival and want information related to that, then you have come to the right place. Kerala is one of the best places for a luxury holiday in India. One fun way of planning a holiday trip to Kerala is to go during one of the many festivals that are celebrated wholeheartedly in the state of Kerala. Kerala is not only famous for its luxury houseboats, but also its colourful and grand festivals. Popularly known as God’s Own Country, Kerala has festivals that are spread out across a calendar year that celebrate the culture and heritage of the place. So, if you are planning to go on a luxury holiday in South India, make it to Kerala during a festival because it gives you a chance to be part of something bigger than just your surroundings. It’s a peek into the culture of the place. Below is a list of some of the festivals celebrated in Kerala around which you can plan your trip:

Onam
Onam is considered to be one of the most important festivals in Kerala. Onam is celebrated in the month of August or September and is called the harvest festival. It is believed that on this day every year, King Mahabali comes back from the netherworld and pays a visit to his subjects. The festival celebrations begin with Athachamayam, which is a street parade where one can witness decorated elephants, traditional art forms of Kerala and musicians. The parade then proceeds to go through Thrikkakara, the place where the first Onam was celebrated. One can also attend art fairs and stage shows during this time in Trivandrum. One must-see event during Onam is Pulikali, a street procession where hundreds of men paint themselves as tigers and march through the streets while dancing and beating on the drums.

Snake Boat Races
The celebrations of this event are spread throughout July to September. This is the time when people put the ultra luxury houseboats on the backburner to make way for the small snake boats that compete against each other in these races. Watching the spectacle of various 90 – 110 feet boats with around 90 to 100 oarsmen, racing with each other is thrilling, to say the least. It is an exciting display of sportsmanship and rowing skills. Book a tour with Spice Routes Luxury Cruises during the Nehru Snake Boat Race that happens close to the Punnamada jetty.

Theyyam Festival
Celebrated in the month of February, Theyyam is one of the most popular festivals in Kerala. The Theyyam festival is 800 years old. The festival puts on display a large variety of folk art and folk dances of Kerala. Some of the Theyyam performances that a person can witness include Wayanad Kulaven, Raktha Chamundi and Kari Chamundi. Red, elaborate masks and folklores told by men who dance in them are the highlight.

Attukal Pongala
Celebrated in the month of February or March, Attukal Pongala is a festival exclusively for women. The festival is celebrated at the Attuki Devi Temple which is located in the city of Trivandrum where women from all religions, caste, and colour gather wearing their best traditional attire. Attukal Pongala finds its mention in the Guinness Book of World Records as the festival that holds the record for the largest gathering of women for a religious purpose.

Christmas and New Year’s
More than 25 percent of the population of Kerala is of Christian faith, so it comes as no surprise that Christmas is celebrated with great enthusiasm in Kerala. The city of Kochi stands out in its Christmas and New Year’s celebrations as it might be the only place on earth where effigies of Santa Claus are burnt at midnight to welcome the new year. The message behind this is to burn the past and welcome the new year with open arms.

So, apart from the obvious attractions of Kerala like the Kerala houseboat tour and the backwater rides on the Alleppey houseboat and Kumarakom houseboat, there are the beautiful and culturally rich festivals of Kerala that attract the tourists and travellers from around the world. This article will come in real handy if you are planning to visit Kerala during a festival.